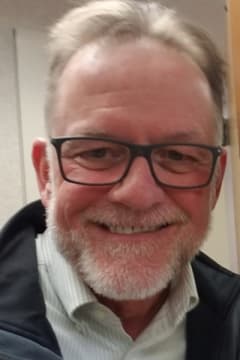 Dale Gerus, 60, passed away April 8, 2020, after a sudden but devastating bout with cancer.

He was born on September 19, 1959, in Cleveland to Borus and Grace Gerus. Dale graduated from Berea High School and received a BS in Business from Miami University. Later in life, he attained a BS in Radiologic and Imaging Sciences Technology from Kent State. He worked in a variety of technology-related positions, most recently retiring from radiology imaging system administration.

Dale was steadfast in his participation in the local recovery community over the past 29 years, sharing his experience, his calm and welcoming spirit, and his enthusiasm for the AA program. In retirement, he became involved in volunteer work with the non-profit RAD-AID International, bringing radiology systems and training to underserved populations around the world. In his free time, Dale enjoyed hiking, biking, sporting events, especially Indians baseball and sports car racing, and creating culinary delights. Dale loved to travel, explore nature and experience different cultures.

It’s impossible to capture the essence of a person in a few sentences, but in the words of friends who wrote to Dale during his final days, Dale was a man of integrity, he "walked the walk," was thoughtful, matter of fact, humorous, encouraging, grateful, deeply spiritual and took joy in living life to the fullest. He helped so many and will be sorely missed. He was a true friend and a doting uncle who never missed a milestone event for his loved ones.

Due to the restrictions on public gatherings, a public memorial service will be held later. In lieu of flowers, memorials may be made to Akron AA Intergroup (AA members only, akronaa.org or 775 N. Main St., Akron OH 44310) or Summit Metro Parks Foundation, 975 Treaty Line Rd., Akron, OH 44313.

Honor the life of Dale Gerus

Please share a condolence, photo or memory of Dale. We welcome all condolences that are positive and uplifting that will help family and friends heal.